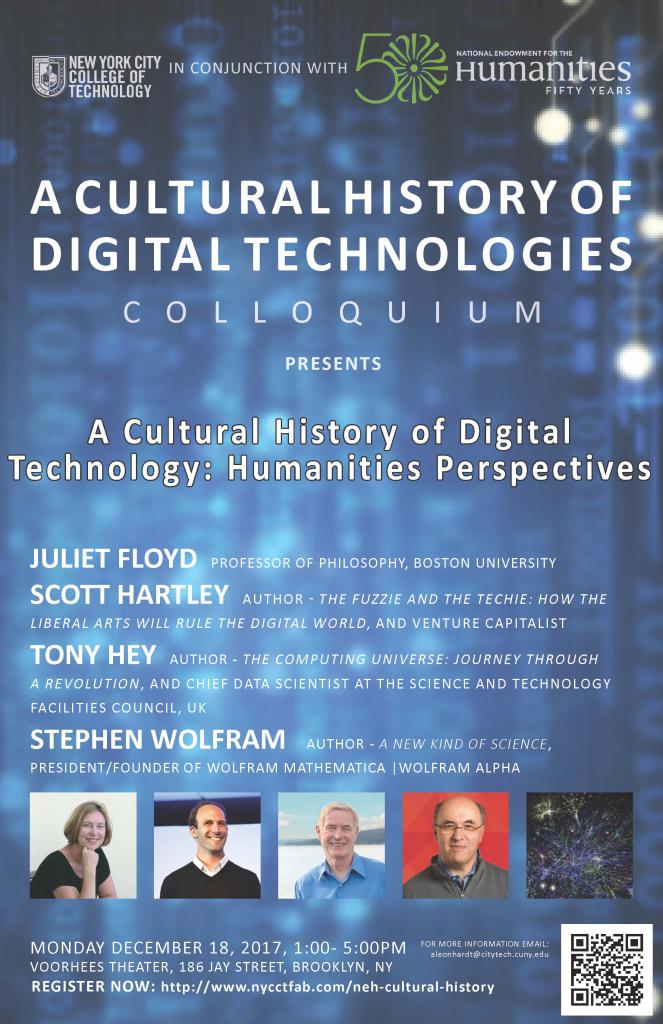 Please join us for presentations and conversation with our panel of distinguished speakers. This event is hosted by the College and the National Endowment for the Humanities Grant A Cultural History of Digital Technologies.

Professor Juliet Floyd is Professor of Philosophy at Boston University, and a philosopher of logic, mathematics, and scientific method. She received her Ph.D. from Harvard University and is Associate Senior Editor, Twentieth Century Philosophy, The Stanford Encyclopedia of Philosophy, and co-editor of the book Philosophy of Emerging Media: Understanding, Appreciation, Application, and Philosophical Explorations of the Legacy of Alan Turing. She also is co-directing a Mellon Foundation, the Sawyer Seminar grant, Humanities, and Technology at the Crossroads.

Professor Tony Hey is a Senior Data Science Fellow at the University of Washington eScience Institute and Chief Data Scientist at Science and Technology Facilities Council, UK. He was Vice President for External Research at Microsoft and has worked at CERN in Geneva, Switzerland, and the University of Southampton, CalTech. He holds a Ph.D. from Oxford University in Theoretical Physics, from which he went on to a Post-Doctoral position at CalTech and then worked at Los Alamos National Laboratory. He is also author and co-author of a number of books, including The Computing Universe: Journey through a Revolution, The Quantum Universe, The Feynman Lectures on Computing, and Einstein’s Mirror.

Scott Hartley is a venture capitalist and author of the book The Fuzzy and the Techie. He has degrees from Stanford and Columbia University, and has worked with Google, Facebook, Harvard’s Berkman Center for Internet & Society and is a former partner at Mohr, Davidow Ventures. In addition, he has served as Presidential Innovation Fellow at the White House.

Dr. Stephen Wolfram is a British-American computer scientist, physicist, and businessman. He is known for his work in computer science, mathematics, and theoretical physics. He has a doctorate from Caltech, and is the inventor of Mathematica, software for automating calculations and Wolfram|Alpha a knowledge engine that lays behind Siri and other AI interfaces—which is seen as a new interface for computation that will enable humans and machines to interact at a vastly richer and higher level than ever before. He is the author of A New Kind of Science, published in 2002—where he calls for a revolution in traditional mathematical methods.